They all warned me and I didn’t believe them  “Just wait until you hit your thirties and it will start!!”.  At first I didn’t notice it but now it’s undeniable that I’m well on my way to becoming spherical. I knew it was time to face facts when my online order of a pair of trousers turned up and to my horror I’d ordered an elasticated waist by mistake – ugh nana pants.  Also to my horror, I decided to to keep them after trying them on (Soooo comfy).

Part of the problem is I’m a true disciple of Oscar Wilde – “The only way to get rid of temptation is to yield to it”.  I like beer, wine and pies and pork crackling…oh god the pork crackling!!!  The simple adage of “eat less- exercise more” doesn’t seem to be working (perhaps because I’m not actually technically eating less or exercising more).  So maybe it’s time to take a look at that skinny smug lot who are evangelising about  malt syrup and activated almonds?? I know, they look a little cray-cray but they are THIN, thin I tell you! Not a button hole extender in sight!  So, for the next 6 months I’m going to attempt a Zeitgeist diet a month.  Will they be actually possible in the realms of real world, will the food be edible and will they actually work??

By the way if you don’t know who Jessie is check out the iconic Fast Show here.

Hello there.  So this months offering is based around the self styled health guru Sarah Wilson’s “I Quit Sugar”.  I’d like to say upfront that I’m not against the idea of quitting processed sugar per se,  it seems like a particularly good idea to not eat foods with lots of hidden sugar like cereals and canned/packet foods so keep that in mind when I start my cray cray rants.  The rants will generally be focussed on the utter crap that this ninny spouts!!!  After just reading the introduction I was overwhelmed by sadness that I’d just contributed $25 to her accounts so she can continue to take pictures of herself with a bicycle and a Byron Bay calico shopping bag.  I’ll give you a  taster today of some of her pronouncements…..

“I’ve never eaten a krispy kreme donut and ice cream bores me” – (wtf who doesn’t like ice-cream. Losers. That’s who.)

“What started as an experiment soon became a way of life, then a campaign to alert others to the HEALTH DANGERS OF SUGAR”

“This book is about losing weight and getting well”

“Gwyneth Paltrow kindly shared this recipe with me…”

Wanna vomit yet?  I do.  Looks like I’ll lose weight here, by not keeping my dinner down.  Anyway, I’m committed for a month to the cult of Sarah, better buy some malt syrup.

EASE 0/10:  This was really, really hard and is clearly not suited to my penchant for instant gratification.  I wanted to knaw my own arm off by 3pm every day I fasted.  I never got used to it like the book promised.

STICKABILITY 4/10:  The first few times I was very strict, then the rules got a little loosey goosey.  Some people find this very easy to stick to.  Not me.

FOOD TASTINESS 8/10:  Given you can pretty much eat what you want on the off days food tastiness not an issue, but even on the 500 cal days some steamed fish and vegetables is still a delicious meal….particularly when you haven’t eaten.  Hopefully no one saw me liking the plate (and the cooking pan).

LONGEVITY POTENTIAL 1/10:  I could not wait for the month to end.

HEALTH BENEFITS OBSERVED 8/10: The irony is that I felt really good the day after fasting – lighter, more energy,  no real food cravings so I wish I did find it easier.

SPHERICAL REDUCTION 4/10: Only another 1kg in the bank but better that nothing.  It was probably the wine.

SURPRISES? 4/10:  Probably that I was sooooo depressed by not eating.  I wanted go to bed at 8pm because life looked very bleak after 2 skipped meals.  I’m a bit pathetic aren’t I?

Overall.  Me no likey.

Well, you’ve probably worked out by the lack of jaunty posts, this is not the diet for me.  Where’s the hilarity as I make non edible potato rosti?? Where’s the surprise that coconut flour tortillas are awesome?  Where’s the realisation of what I’ve been missing by not drinking nut milk (the answer by the way is absolutely nothing)?

No, apart from being totally depressing the 5:2 diet commits an even greater sin.  It is DULL.

I’ve been pretty crap at sticking to it, there have been some sneaky scarfings on the drive home of the haribo party mix stashed in the central console of the car.  I’ve even eaten the fluff that gets in the bag.  One night I drank a bottle of wine in place of dinner – it’s liquid so not cheating right?

I’ll do the official write up this weekend….but don’t hold your breath!  Next month is going to be much more interesting as I explore the idiot writings of Sarah “I quit sugar but not really” Wilson.

Apologies for my absence, it turns out that evidence based diets are nowhere near as fun to blog about as those devised by crazies looking to make their fortune by writing a diet book deal and flogging it by appearing on boring morning TV shows aimed at the recently lobotomised.

Yes, those diets that actually lower your cholesterol and regulate your insulin – no fun at all, this I will attest to.  I’ve now fasted a total of 4 times.  The first two times weren’t too bad at all, my methodology was to go as long as could that day without consuming anything (so from around 7pm the previous evening to around 3pm the next day) at this point I was ready to eat the crotch out of a low flying duck and would treat myself to a tasty 100 calorie apple.  This sated me until dinner of 150g piece of white fish and some vegetables which again was pretty satisfying.

Then…..disaster.  I forgot that I had arranged lunch on a fast day, so I decided that I would try the “eat all the calories at lunchtime” methodology, this definitely does not work, for me at any rate.  That evening stretched ahead of me like a long, dark, miserable tunnel.  I turned into a screeching harpy that stared forlornly into the fridge every 20 minutes to look at what I couldn’t have.  I ended up having a glass of wine that I wasn’t meant to drink and retiring sullenly to bed.  Needless to say I won’t be doing that again!

New month and it’s time for a new diet (I have to confess that I did have a cheese frenzy the day after Paleo ended).  This month it’s time to try the 5:2 diet, also know as ‘The fast diet’.  Now although fasting has been around for centuries, it’s not really been something I’ve felt compelled to try strangely enough.  I first considered it when a few friends were raving about how easy it was to lose weight using the 5:2 technique.

The premise of the diet is easy, on 5 days eat normally and 2 days a week consume only 500 calories (about 1/4 of a normal daily intake).  Not only does it promise weight loss but a whole range of other benefits such as lower cholesterol, lower blood pressure and extreme smugness.

I’m not sure this will entertain me quite as much as Paleo did, andI suspect there will be much wailing, going to bed early and swearing to report post my fasting days.  It will possibly be fun to see how far I can extend 500 calories and on others just blow the lot on a peanut butter cro-nut and spend the rest of the day weeping from hunger.  Buckle up!!

And so as my Paleo month draws to a close, it’s time to evaluate.  I’m not sure I have all my criteria set quite yet but here goes:

EASE 8/10:  Overall it wasn’t too bad. I had to shop and cook a fair bit but as I like cooking I didn’t mind that too much.  Eating out wasn’t too bad either,  most menus had at least one thing I could eat.  The Pete Evans book had some good ideas for creating things like Paleo Banana Bread, Frittata and Coconut tortillas.  I’m not sure of the ‘Paleoness’ of any of those things, I can’t quite imagine the caveman convo “Ugg, darling.  Pass the Frittata will you??”.

STICKABILITY 8/10: I did pretty well at sticking to the rules, other than the soy coffees and alcohol.  I had a couple of minor cheats, but come on who can pass up a bowl of Eton Mess???

FOOD TASTINESS 8/10:  I would have given this a 9 but some epic failures like the sweet potato hash brown failure (straight from pan to the bin) and the soggy zucchini noodles prevent it.

LONGEVITY POTENTIAL 5/10:  I like meat and veg so doing it for a month is very doable, as a longer term lifestyle diet I’d have trouble.  Breakfast is just TOO HARD.  I will be having triple pancakes with a topping of muffins tomorrow.

HEALTH BENEFITS OBSERVED 4/10:  I didn’t get the boundless energy promised by Pete, but that’s probably because he has a colonic every other day and doesn’t have to get up until 11am.  I was working pretty hard this last month so suspect some of my promised energy was sapped by that.  I did notice however a significant reduction in bloating in the belly.

SPHERICAL REDUCTION 2/10: Not really, only 1KG lost but I didn’t exercise and I drank booze.

SURPRISES? 5/10:  I was surprised I didn’t loose more poundage given the significant reduction in consumption of cheese (probably compensated for the significant increase in consumption of salami and other small goods ).   Another surprise was trying so many new things on menus I would NEVER have normally gone for.  Paleo was a winner at getting me out of my food choice ruts .

Oh dear god, I ate something Vegan.  This dear reader is a Chia seed and coconut pudding (with black sesame, pistachio and mint).  I had it for breakfast at the painfully hipster Queensberry Pour House.  To paint you a picture of this place they don’t have skinny milk for coffees (nor soy for that matter), they have tasting notes for their daily pours, everyone has a beard (even the girls) and they make all of their own crockery – no doubt they dig up clay from himalayan mountainside too.  I had this for breakfast, thinking of it as a porridge substitute, however it was cold and a bit weird – I managed about half of it and don’t see it knocking Quinoa of it’s perch of trendiest niche grain product any time soon.  I debated the merits of drinking a coffee for a while given it was made with almond milk.  Don’t do it people. You’ve been warned. 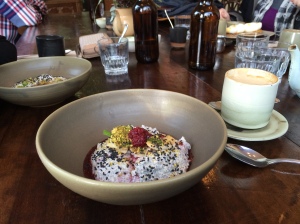 Jessie's Diets – This month I will mostly be eating….
Create a free website or blog at WordPress.com.